Power to the mob!

We’ve all heard it by now: “It must be true, because so many people are saying it”. Well, that is actually fallacious reasoning. It is an argumentum ad populum (Latin for appeal to the people).

The argumentum ad populum fallacy uses the voice of the people to proof a point. The louder the people’s voice, the more validity a claim is considered to have. It’s flawed reasoning, though. If there is a lack of evidence to substantiate a claim, it may still be false. No matter how many people believe it to be true.

Another name for this type of reasoning is: the common belief fallacy. 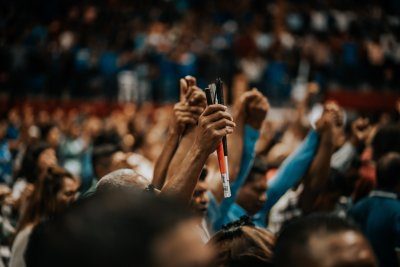 The voice of the people is not always right …

While there is likely to be some grain of truth in a wide-spread belief, it is flawed reasoning if there is no objective evidence to substantiate it.

Another name for it is consensus gentium (Latin for agreement of the people). That may even be a better term: when there is consensus about a topic, when most of us agree, we often feel something is more credible and more likely to be true. While in fact, that proves nothing.

This informal fallacy is closely related to the bandwagon fallacy, which relies more on peer pressure.

How to recognize an argumentum ad populum

When you hear things like: “Well…. there are a lot of people who agree with me. We’re not a small group anymore,” then you’ve just been slapped with an argumentum ad populum. The number of people who support a claim says nothing about the validity of that claim.

A clear indication that someone uses this type of fallacious argumentation is the use of percentages to convince, e.g. references to an obcure poll. Look for phrases along the lines of:
– “30% of Brits doubt that…” or
– “30% of Americans don’t believe the official story that is presented in the media.”

Chances are that poll results are misinterpreted or exaggerated by interpreting conveniently. They may even be entirely fabricated. Moreover, such percentages are usually hard to check, especially in a live debate (thus an often used tactic).

It is fallacious when the percentage – even if factual – would still not prove anything.

How to deal with an argumentum ad populum

So, be alert when percentages are being used. Always zoom in on it.

You now know how to respond if you suspect: “If there is no objective evidence to support what you are claiming, it is not proven to be true. No matter how many people believe it.“

In a typical conversation about unfounded conspiracy claims, your conversation partner is likely to retort to logical arguments with another logical fallacy: an appeal to authority, a flawed reference to a non-existent expert or pseudoscientist.

You’ll learn the difference between scientists and pseudoscientists, and how to deal with that in the course: Challenging conspiracy theories.