In this form of flawed reasoning, your argument is discredited by attacking your personal behavior – while it is not relevant for the argument. It is also known as appeal to hypocrisy and it is used to disqualify the speaker.

A typical Tū Quoque: Who are you to talk! 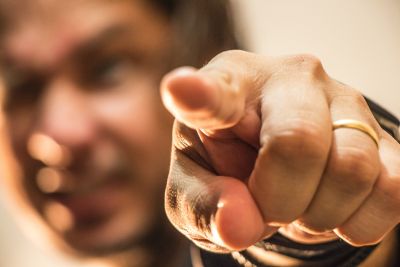 This reasoning falsely asserts that a statement is wrong, just because it is inconsistent with the speaker’s own behavior.

Indeed, that may make a statement hypocritical, but not necessarily wrong. The tu quoque fallacy is an informal fallacy.

For instance, I can warn that smoking is bad for your health, even though I am smoking myself. You may reply: Well, you’re a smoker yourself (as if that disqualifies me to give a negative opinion on smoking). The mere fact that I’m a smoker too, doesn’t mean that smoking is good for you after all.

It would make me a bit stupid, perhaps, if I continue to smoke, while I am aware of the risks. But smoking is still a health risk.

HOW TO DEAL with AN APPEAL TO HYPOCRISY

TU QUOQUE argumentation is an effective distraction tactic, shifting attention away from another target. It weakens the position of an attacker, who is placed in the defensive.

Imagine this situation. Say, a man committed treason and two women are discussing the case. Ann wants that man to be prosecuted.

Ann: He committed treason! He should be prosecuted. He should be in prison.
Karen: Pfff. Your party is not without faults either!

Ann’s political party may or may not be terribly flawed, but that’s not the issue here. That has no impact on whether the man in question did or did not commit treason, and whether or not he should be prosecuted.

Karen’s reply deflects from the question at hand, because the attention has been shifted from the possible traitor to Ann, who was criticizing him.

Ann now has a choice:

She can deny that her party has any faults (which would not be very credible, because nobody’s perfect), or she can admit the party is flawed, but that their faults are minor compared with treason (somehow she has become part of the problem). Either way, her position has been weakened by the TU QUOQUE fallacy.

If Ann recognizes the TU QUOQUE fallacy, though, other options become available.

For instance, she can say: Don’t trivialize what happened, we are discussing a serious criminal act, treason. Whether you and I have character flaws, that is not relevant.

Did you notice what she did in the last sentence? By mirroring the accusation, she’s placed Karen in a similar defensive position.

Very clever, that’ll teach Karen not to use a TU QUOQUE fallacy again!

Synonyms:
You also fallacy, You too fallacy, Appeal to hypocrisy
Related Explainers: